The possibility of transferring processes from the real into the virtual world has occupied me for most of this year in the context of teaching during the first course of HWR Berlin in Second Life, an industry practice supervision course of four hours length per week.*

This was a thoroughly gratifying experience – the students were marvelous too and very patient, which helped – and, in the end, said things like: “I thought the course was really really cool.” It hardly gets better than that: this is what I’d like my twenty-something year old students like to say about my classes!

In summary, the experiment showed that many classroom processes could be transferred “in-world” (meaning: to Second Life) not only without a loss of quality but at times – as in the case of role plays – with a noticeable gain.

Which brings me to the issue of constellations. In short, constellations are interventions using a spatial representation of elements of a system – be it a family, an organisation or a person. Space is used to “set up” an issue that needs to be resolved. “Setting up” in practice means choosing representatives for aspects of the system related to the issue – these representatives can be other people (strangers) or inanimate objects. With objects instead of shoes (as in the photo), a constellation could look like this in SL: 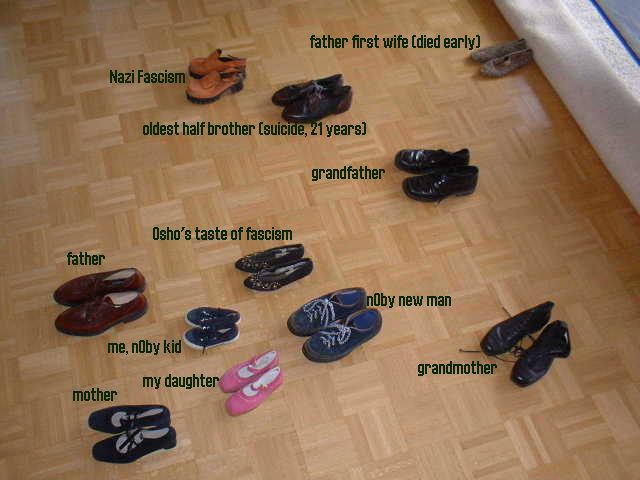 Moving the objects around simulates a change to the original problem setting and can lead to a non-obvious solution. The working assumption, confirmed in practice, is that the topology of the problem setting contains information accessible through this process.
As I have explained elsewhere at length, the actual process is more complicated and also  involves a diagnostic interview, an opening round and a very important followup to the simulation itself. It works particularly well in reality with people instead of objects, which is what we’ll be trying to do next week in Second Life.
The big question on everybody’s chapped lips is, of course: will the transfer to the metaverse work? Intuitively, I don’t see why it wouldn’t but it would be great to talk discuss possible issues and traps with some of you, too, whaddayathink? What could go wrong when doing this work with avatars instead of people or objects?
*) I’m currently writing an academic paper about this course – to be available later this year.